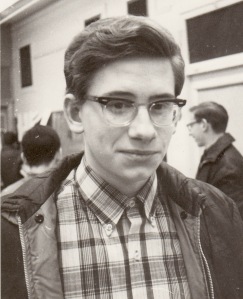 Not sure how old in this picture, but in his teens. I have very few photos of Ken. People tend to take pictures of happy times, and not many times with Ken were happy, not in his last ten years.

The day after Remembrance Day I always think of my older brother Ken, because on November 12, 1977, he took his own life. That’s thirty-seven years ago now.

Growing up he was an exceptional student. Far and away tops at our elementary school. It was beneficial to be his sister, as teachers would make assumptions about my own capabilities. I admired him, and would say it was basically friendly between us at that stage in our lives. I did indeed look up to him.

I remember he was always on the honour roll throughout high school, missing only once, getting ‘just’ an honourable mention (my usual standing). That was when he was getting up at 4 am to deliver the morning paper, so I think an excusable lapse. The summer of 1967, between his 11th and 12th grades, our mother let him have the car and he and a couple of friends drove to Montreal for Expo 67. Quite an adventure for a bunch of 17-year-olds. He had a brief moment of fame, being one of the team from our high school to play on Reach for the Top, a pretty big deal back then. I remember him getting called up for so many awards at an assembly, that they automatically called him for one he hadn’t actually won. The only one. Don’t know how he felt about that.

He wasn’t a very nice older brother though, not in high school. But I would pinpoint it as during Grade 12, that he started to show signs of mental illness, because that year the nature of his behaviour towards me changed in tone, from nasty to dangerous. And I believe that his friends started to fall away, because as one put it to me many years later, “he just wasn’t any fun anymore.” During the next few years, he began to hear voices, saw threats everywhere. I have some papers of his, a sad history of trying to get a job, and of strange and disturbing ramblings. Not a lot of sense coming out of a once-brilliant mind.

Neither of my parents ever named his illness, or even, I think, acknowledged that it was an illness at all. He was just difficult. He was certainly difficult for me, and I will admit that I didn’t realize he had a nameable illness either, and at that stage, I’m not sure I’d have cared. But he was a constant threat, mostly emotional. During my early teens (I was two years younger) I’d say his behaviour was ‘typical’ bullying: mockery and humiliation. He had me quite convinced of my worthlessness, to not state it too lightly.

But when he was in Grade 12, me in Grade 10, he became physically threatening towards me, and so I stayed out of the house unless our mother was home from work. Home did not feel safe until he moved over to our father’s house, to attend university, though that didn’t work out terribly well. But it was an immense relief to me, to have him live somewhere else. He lasted two years at our father’s and then came back, at which time I took a turn at our father’s. I’m not sure, but I imagine some of his hostility towards me might have gotten worse then, as Dad had tossed him out, and taken me instead. Guesswork, on my part.

During the next few years he regularly told my parents that he would kill me. The family’s response was to keep us apart, which was fine with me, because I would say my primary feeling towards him besides fear was hatred. Certainly not compassion. Although I will say that something eventually changed for me, because I remember feeling it was wrong to leave him off the guest list when I got married, though that’s what I did, on my parents’ advice.

He was not diagnosed until his last year (surely he was diagnosed, finally? though I don’t remember either parent telling us, his brother and sister, what the doctors said). He’d been living with our cousin, and they’d had a falling out. Ken had become immobilized, wouldn’t talk, wouldn’t get out of bed, and my father finally got him into the emergency ward. From there he was transferred to the psych ward at UBC’s hospital. And then he was filled up with anti-psychotic drugs. I believe it was the first time he understood that it was him that was sick, and not the rest of us, and it’s my belief that is why he chose suicide. (My father thought it had something to do with his having left our mother, that there was some link between their divorce and Ken’s suicide, and he never let that guilt go.) We all had our own theories. I think what had Ken was paranoid schizophrenia. Just saying. (I do think the disease had him, not the other way around.) 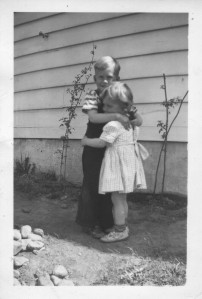 were it ever thus

I remember visiting him in the hospital, and feeling that Ken was back, that he was benign, no threat to me. I remembered that we’d once liked each other. We talked. In September our cousin brought him out on a day-trip to our mother’s house in Agassiz, for the Fall Fair. I went for a long walk with him, and we talked more. I wasn’t afraid of him, and I didn’t hate him; it all went away. (Our mother was panicked, because she feared I would turn up dead in a farmer’s field somewhere, but really, we just went for a walk.) It was a beautiful day. He  talked slowly, as though through jello (powerful drugs). It looked as though the world were too bright, hard to see out. Like he was peering around something.

Ken spent about three months in hospital, and then they let him out, as a day patient. He moved into a dismal apartment on East Hastings Street. My memory is likely unreliable, but I have him visiting at my house, for the first time ever, at any of the places I had lived since leaving ‘home,’ this on his last weekend. My mother, who would stay with me when in town, was there too, as she must have brought him over. I also have a memory of going out for breakfast with him, our other brother, my then-husband and myself. There was a lot of laughter!

And then my memory says that the next day my mother left to pick him up, because he was going to go out to Agassiz and stay with her for awhile. My mother thought she could make him better, do it right, somehow. Fix things.

There was definitely (and still is) a stigma to admitting mental illness, and it seems there’s even less treatment available now than back then, considering how we’ve traded in the mental hospitals and now have police as the primary ‘caregivers.’ At the time it also played out that people wouldn’t talk about his death, didn’t pass on the news, because somehow suicide was shameful. Or something, I don’t know. Makes it hard though, everyone you bump into asks, “What’s new?” and you answer something like “Not much, except my brother killed himself,” and feel like a jerk somehow. No easy way to say it. I do remember my grandmother telling someone he’d “died on a heart attack.” Which is true-ish in a very black-humourish way, but I’ll spare you those details.

When our mother got to his apartment she reported, eventually, that he was hostile towards her, and told her he wasn’t coming with her. She got angry (terribly disappointed) and they argued. She told me she shouted to him that she hoped he’d rot in there, and slammed out the door, going home alone. She was so upset she didn’t tell anyone he hadn’t gone with her.

He killed himself that day, likely soon after she left, though he wasn’t found for about a week. (And yes, speaking of guilt, Mom’s last words to him haunted her for the rest of her life.)

This entry was posted in life. Bookmark the permalink.
Loading Comments...