I’ve been in Ottawa for over a week now, which astonishes me, the way time flits by. But I wanted to tell the tale of my driving trip to get here: I left off in smokey Saskatoon, which drew me and my brother as well, both of us curious about the city where our mother was born. It’s where my grandparents met, and married, and started the family, before they moved to Outlook, where my grandfather took over a legal practice. 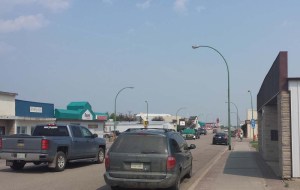 Outlook: not a very big town. Hard to imagine it 85 years ago as an improvement over their life in Saskatoon.

Family history/mythology on my mother’s side centres around Outlook because my grandfather killed himself in 1930, leaving my grandmother to sort things out with three small children, the oldest being my mother, just two months short of her sixth birthday. Not surprisingly I suppose, his death has had repercussions down the generations, affecting those three kids as it did. I don’t think anyone knows exactly why he killed himself. My mother speculated it had something to do with the Depression. Her mother, my grandmother, told her “we won’t talk about it” and they never did, which wasn’t a particularly helpful tactic. It could be he was having his own depression, brought on by PTSD, which would have been called shell-shock back then. A veteran, he’d spent time in the trenches in France in WWI, and he’d lost an arm there. Hard to see inside the mind of someone you’ve never known.

Our grandparents, in happier days in Saskatchewan.

Anyway, my brother and I stayed two nights in Saskatoon, and on the day in between, we drove down to Outlook, to see what the world might have looked like to our mother’s six-year-old eyes. We were also curious if there was any personal history to be found there. So we went to the Museum, which did not have records of that sort, but they did direct us to the Outlook Cemetery. So we went there, and had a walk-through, though we had no idea whether he’d really be there. But there was a sign with a phone number, so my brother sensibly called it, and found that there were no civic records about where our grandfather might be buried. But, brilliant idea, the voice on the phone sent us to the offices of the local paper, The Outlook.

They don’t have computer records, but they have the hard copies, and handed us the 1930 folder of old brittle newspapers to look through. I couldn’t remember the exact date of death, but remembered it was shortly before our mother’s birthday. Turned out there was an ad on each front page for our grandfather’s practice, so the only thing to do was flip through till we found where the ad disappeared. Which it did, in September. And that issue had a front page story about his death, without, of course, stating how he had died. I think it has to do with some kind of misguided shame around suicide. I mean, the shame is that anyone feels that that’s the choice, but keeping it unnamed, well, means everyone who has a suicide in their family gets to think it’s just them. Anyway, sorry, digression. The newspaper story told us that his body had been shipped back home to Fenelon Falls, Ontario, which also figures in (mother’s) family stories, which I’ll get to when I get to Fenelon Falls.

There is an outlook to Outlook, over the South Saskatchewan River. Lovely trestle bridge to walk on, except it was closed.

We went for lunch, and then we went for a drive-about, to see what Outlook looks like, and then we went back to Sasktoon, to take ourselves to an outdoor venue of the Jazz Festival, where we were treated to the sounds of Saskatoon’s Legendary Rhythm and Blues Revue. No complaints, lots of fun, we danced away the evening. Next morning we loaded up the car, went for breakfast, and I dropped my brother off at the airport for a flight home, and pointed my car toward Winnipeg.

again, to be continued

This entry was posted in driving, life. Bookmark the permalink.
Loading Comments...