Once I’d had my fill of Fenelon Falls, I felt the draw of current family. I’m not sure I would ever have gotten around to driving this far if I didn’t have a daughter and her family (which includes two scrumptious granddaughters) living here. I did make one more slight detour though on my way here, a backtrack into Orillia, and a visit to Stephen Leacock’s house. I remember ‘studying’ Sunshine Sketches of a Little Town when I was back in university ( that’s a very long time ago). I can’t swear that I ever actually read the book, though; in the arrogance or whatever of youth, I just wasn’t interested. But here I was, just coming away from getting a sense of what a little town in Ontario might have been like eighty to ninety years ago, and suddenly it seemed to have some relevance, to see what Leacock’s take was on small-town Ontario back when that was my grandfather’s life. 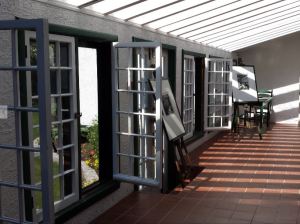 I can imagine writing quite cheerfully in this room.

Stephen Leacock is Canada’s model for writing with humour, or so I’ve read somewhere. I can’t tell you whether he makes me laugh, yet, but I did pick up a copy at the gift shop and I do intend to read it, finally, while thinking of this one branch of my ancestry. I know that you can travel by reading, but I find there’s some added bonus to imagining a setting when you’ve seen one like it. There’s a different feel to the air in Ontario from my home in British Columbia, and I’m not convinced that words alone can convey that. And here’s a confession. I’ve always lived in a big city, and my understanding of what might be good about life in a small place? Blinkered. 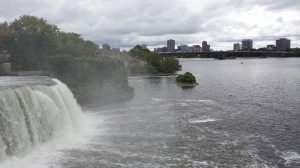 Rideau Falls, where the Rideau River runs into the Ottawa River. Gatineau in the background.

Anyway, I’m in Ottawa now (yes, yes, a city) temporarily at home in a furnished bachelor suite in an old house in Sandy Hill (if you know Ottawa). The neighbourhood is home to lots of rentals, as it’s close to the University of Ottawa. So a mix of kind of shabby houses, seen better days, and ones that are marvelously kept up, lovely houses from an earlier era. Lots of embassies scattered around too, this being a government town. I’m used to wood-frame houses, and Ontario is full of brick. So it definitely looks different here from what I’m used to. Lots of trees, but few evergreens, so that’s different too. And I’ll confess that I miss the backdrop of the mountains. But there are lots of waterways, and there is plenty to like here. (I’m two blocks from the Rideau River in one direction, not that far from the Canal or from the Ottawa River and views over to Gatineau as well. One of my recent walks, I went past 24 Sussex, and the Governor General’s place as well, not an overly long way from here.) 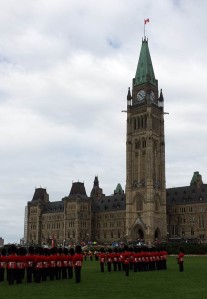 I’ve spent a little time being touristy, and stumbled on a bit of pomp the other day on Parliament Hill: the changing of the guard. I was drawn in by the bagpipes.

I lucked out in finding this place online. It’s a short walk to my daughter’s home, and a short walk to the market; slightly longer downtown. I’ve taken up my habit of tramping longish distances, but also have the luxury of hopping in my trusty car when I need it. Rent includes parking, which is quite rare this close to downtown.  Rent includes everything, actually, and at a reasonable price. And the landlady has managed to furnish the place in a homey way, and has thought of details that quite often get left out in places that are supposed to have everything you might need. (Really. There’s even a salad spinner in the kitchen.)

It’s called a bachelor because there’s no separate bedroom, but there is a separate big kitchen, and a back balcony, feels like a back porch (and I suppose technically is, as there are stairs down) where I like to sit out with my coffee on mornings when the sun isn’t baking down. I feel totally at home here. Lots of windows, something I didn’t have in my apartment in Vancouver. A window and a door in the kitchen. Two windows in the really big bathroom, and two in the living/bedroom, so lots of light. It proves my point (to myself) that the biggest thing wrong with the place I sold back in Vancouver, was that I had to turn on lights all the time, as it was so dark inside otherwise. 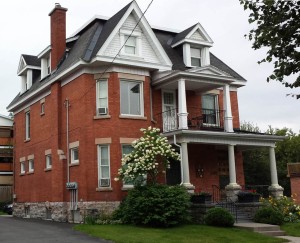 Grand old house for my temporary home. My place faces the back, but you can see my living room window on the second floor, on the side.

But home. That’s a topic I scratch my head about. This isn’t home, though it’s homey, and I dragged enough belongings with me that I’m not missing much, for now. I occasionally think of my things all stuffed into a storage locker at home, and I see that a lot of it probably doesn’t matter. (I would like to have a book case in here — one lack the place has.) But I still refer to going home, eventually. I’m going to pack up and leave here at the end of the month, and for a while my car will be home, I suppose. I’m going to make a loop through the States, visiting some more family, but given the distances, mostly traveling down long roads and breathing in the air, getting a feel for it, of places I’ve read about, or seen in movies too, I suppose. Becaue there’s no scratch and sniff in video. Not yet anyway. The soundtrack tends to be different too.

One friend who is here, introduces me as someone who is homeless, and I think, well, that’s not quite accurate. I have a permanent address back in Vancouver and a place to stay when I get back there. It’s just that I don’t own a home right now. And that’s the first time in slightly over forty years, that my name hasn’t been on a land title. Makes me aware of how fortunate I’ve been, something to be grateful for. Anyway, I’ve responded that I’m not homeless. I’m just home-free right now. It’s a temporary condition. Maybe. I can’t quite see that far ahead to where I might finally settle, and then unpack all those boxes, currently crammed into what’s essentially an indoor garage, in Vancouver. But it will be Vancouver, or close to it.

This entry was posted in driving, reading, writing. Bookmark the permalink.
Loading Comments...